At the LVISS yesterday we learned a tune called “Top the Candle”–a hop jig in D. What IS a hop jig? Good question. Without going to deeply into music theory, I would say that hop jigs are kind of like faster, syncopated slip jigs. It’s kind of like the way slides are like fast jigs with fewer notes. Anyway, there’s definitely a difference in feel between slip jigs and hop jigs. Case in point–The Butterfly is a tune that’s played both ways, and one of our anchors was kind enough to record both versions for us–check it out:

Here are some examples of hop jigs from YouTube:

For discussions about what hop jigs are, see thesession.org.

The Humours of Lisadell. It’s a reel with lovely, almost elegant, easy movement. It has such a nice shape to it. That doesn’t mean it’s easy to play though! I first heard it (to my memory) at a house concert featuring Edel Fox on concertina and Neill Byrne on fiddle. Here’s a link to the recording I made of the tune. Feel free to download that.

Here’s Neill and Edel playing it live again, with Josh Dukes on guitar, and much better audio: 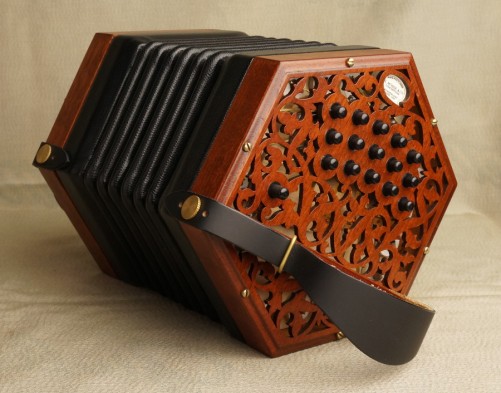 My first instrument for Irish music was the whistle. Ok, wait. Lemme start over.

My first instrument for Irish music was the bodhrán. But that doesn’t count for the LVISS because we don’t do the accompaniment thing. That isn’t to say I won’t be spotlighting the instrument here on the blog though. It does take a good deal of skill to play, and requires a sensitivity to play well with others that many who try the instrument do not properly comprehend.

After bodhrán I tried the whistle. Finally I came around to the concertina–and it stuck!

It’s a beautiful little instrument, both in terms of sound and appearance. It is small, portable, and the tuning is fixed, so you never have to tune up. In fact, if I had a dollar for every time a fluter or fiddler or piper asked me for an A or G, I’d have enough for a new fiddle bow.

Concertinas come in different flavors. The type used in Irish music is the 30 button Anglo type. It plays a different note on each button, depending on whether you’re pushing the bellows or pulling it. This is in contrast to the English system, which plays the same note regardless of bellows direction. Many feel that the need to change bellows direction makes the Anglo more suited to the “bouncy” rhythm of Irish music. There are other concertina types as well, but they are almost never used in Irish music. So I’ll leave them out. No offense.

In the Anglo concertina category (and possibly in the others, I don’t know,) you will find that entry level instruments often have mass-produced accordion reeds installed for sound production. Higher level ones will have authentic concertina reeds. The thing is, concertina reeds are made by hand, which makes them a good deal more expensive, so anyone looking for a starter instrument will likely end up with them. They sound great, and they don’t make concertinas sound like accordions at all, as accordions usually have at least two or more reeds per note, tuned slightly off each other, giving the accordion that fatter sound. Concertina reeds tend to sound more “soulful,” for lack of a better word. A former co-worker of mine once said that she enjoyed hearing me play my “harmonica” at lunch time. She couldn’t actually see me playing, so she thought my accordion reeds sounded harmonica-like, apparently! Whatevs.

All that said, a fine player can make either either type of reed sound amazing. My concertina is a Morse “Céilí” 30 button Anglo. If you go to the Céilí page on the Button box website, you can hear Christian Stevens playing one under the video tab on the right.

I love Chris Stevens’ playing. There are many fine concertina players, indeed both past and present. Many players today find inspiration in the playing of some of the old greats from County Clare in Ireland, where there was, and is still, a great tradition of concertina playing. Mrs. Elizabeth Crotty is one name you’ll hear often, Chris Droney another. The Irish musicologist Gearóid Ó hAllmhuráin has written extenslively on the subject of Clare County concertina playing (and Irish music in general, actually.) Since he’s done so much of the work for me, I’ll just share this link to his essay entitled “Clare: the Heartland of the Irish Concertina.”

Go HERE for a sampling of Clare concertina playing, compiled by the Irish Traditional Music Archive.

One can’t talk about concertina playing in general without mentioning Noel Hill, Mícheál Ó Raghallaigh, Edel Fox, and Caitlín Nic Gabhainn, at the very least, and there are so many more–Páidrag Rynne, Mary MacNamara, and Kitty Hayes, just to scratch the surface. Really there’s an astonishing number of great players out there today, just poke around in the Google place and you’ll find them.

Kira taught us this one–it’s the third tune in this set:

Altogether a great playlist here, the Wednesday night session at Brogan’s in Ennis, Co. Clare, Ireland, with Eoin O’Neill and various co-hosts. It’s a whole different thing over there.

Oh, and see if you can spot the TWO, not one, but TWO, bodhrán players. But notice how they play tastefully and without overwhelming everything? Yeah, that’s the way!

There’s Something so satisfying about this reel. The rolling, bouncy A part is like the rhythm of walking on a crisp, sunny morning on hard packed dirt through the woods. The B part speaks of cresting a rise to see the valley spread out below, or laughter as it echoes off the trees. Ted taught us a two part version of this tune–the most common version–at the last session, but our member Mary swore she had heard a 3 part version somewhere. She found it here:

Good on ya, Mary! Ted’s splendid version can be downloaded at the tunes page. Enjoy! 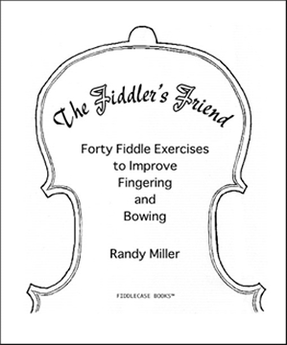 I like practicing the fiddle. Actually, I do a lot more practicing on my own than I do playing fiddle with others. And I do love a good tutor, exercise book, and DVD course. A kind friend let me borrow his Suzuki Method books back in the beginning, which I very much appreciated. I did try them out, but I found that what I really needed was something tailored more to the fiddler, and fiddle music. What I eventually found was a small booklet chock full of exercises ‘specially for fiddlin’ chops, called The Fiddler’s Friend–Forty Fiddle Exercises to Improve Fingering and Bowing, by Mr. Randy Miller. Randy is a musician, author and publisher who’s been playing sessions and dances for over 40 years, and publishes on a variety of music related topics. His work can be found at fiddlecasebooks.com, where you can also order The Fiddler’s Friend. He also leads the monthly session at McNeill’s Brewery in Brattleboro, Vermont, second Wednesdays at 7 pm.

The exercises in TFF seem to be organized from easier to more difficult, and there is an index at the front of the book that sorts each exercise into categories. For example, exercises targeting the first finger of the left hand are grouped together, as are those targeting the second, third and fourth fingers, and there’s also a group targeting bowing skills. Likewise, each exercise as written throughout the book has an illustration of a hand or a fiddle bow next to it showing what the emphasis of the exercise is, so you can easily find something appropriate on the fly. Bowing and fingering patterns are also written into the notation, and you are encouraged to follow these suggestions closely, as doing so should yield the best results. The author also says to “play the exercise(s) first at a slow tempo. Repeat several times, increasing the speed each time.” That’s good advice, and I would add that playing slowly enough to perform the exercises without mistakes is also key, and that you should not increase speed until you can do so.

One caveat–because there are no audio files accompanying the book, one needs to be able to read music at at least a basic level to use it.  I can read music at a basic level, fortunately, but I do better with something to play along with, so I have transcribed some of the exercises into a program called MuseScore, which will create a PDF (or .png, or jpeg) of the notation and also convert it into an mp3 file that you can play along to. MuseScore is free and can be downloaded from musescore.org. (There were a couple kind members of one of the fiddle-related forums online that shared some files of this sort with me awhile back, but I’ve since made a few more. If anyone is interested in them contact me via the contact form on this website.)

Here’s an example of one of the exercises from the book, called “Nimble Minor Pt 1.” They all have interesting descriptive names like that. This one targets the second finger and bowing. An MP3 can be found HERE.

Now, as I mentioned audio does not come with the book. However, there is apparently an app for Mac iOS (8.3 or later) available on iTunes. I have not used this app, so I can’t review it here, but it looks like it includes video clips of Mr. Miller playing the various exercises so that you can hear how they should sound and possibly even play along. If I manage to get a chance to use the app I’ll tell you what I think. the cost is $24.99, but I’m sure it’s worth every penny.

I highly recommend this book as an aid to finer fiddlin’! Go get it and start practicin’!